“Why Him?” takes the concept of “Meet the Parents,” flips it on its head, updates it to include a Silicon Valley millionaire and wrings more laughs out of another of James Franco’s now trademarked flaky characters.

Ned and Barb Fleming (Bryan Cranston and Megan Mullally) are a typical, mid-Western couple. They had their first date at a KISS concert, run a small business and have high hopes for the daughter Stephanie (Zoey Deutch), a brilliant young woman studying at Stanford. It comes as a bit of a shock when they find out their precious Stephanie has been secretly dating dot com millionaire Laird Mayhew (James Franco). When they arrive to spend the holidays at his ultra modern Palo Alto mansion they’re horrified to discover he’s ten years older and over sharer who compliments Mrs. Fleming on her “tight body,” calls Mr. Fleming “dude,” talks about “sloppy car sex” and swears a blue streak.

The happy young couple have been living together for a year in Laird’s swanky pad and now he wants to ask for her hand in marriage. “On Christmas Day I’m going to ask Steph to marry me,” he says to Ned. “I know how tight you are so I really, really want your blessing.” Determined to win Ned over Laird continues, “Give me a few days to win you over in by Christmas day I guarantee you’ll be calling the sun and I’ll be calling you dad.”

What follows is a war of wills—Laird doing everything possible to ingratiate himself to Ned while dear old dad remains unimpressed. Absent in the equation is the one person who really matters, Stephanie.

“Why Him?” is a generation gap comedy with several very funny performances. Cranston and Franco are a classic buddy pairing. Laird has no filter and strange taste in art—a moose preserved in its own urine dominates the living room—while Ned is a buttoned down fuddy duddy who laughs at his own dad jokes.

Franco has tread this territory before but this doesn’t feel like a rehash or a greatest hits performance. Laird may be a handful and a little over enthusiastic—before he even meets the family he has their holiday card blown up and tattooed on his back—but he is genuine. Behind the wide toothy grin is a heart of gold and it makes the Laird more interesting than Franco’s run-of-the-mill on-screen stoner dude.

Cranston revisits his “Malcolm in the Middle” days with a father-knows-best character with a twist. Ned is hopelessly lost in Laird’s world. He doesn’t understand the lingo, the home’s fancy paper-free toilets and, as a print and paper company owner in a high tech world, he especially doesn’t get Laird’s business. It’s a role we’ve seen a thousand times but Cranston works it hard, wringing every laugh out of every pained facial expression.

In the supporting category it’s Keegan-Michael Key as Gustav, Laird’s right-hand-man, who almost steals the show. He’s the Cato to Laird’s Inspector Clouseau, a faithful handler who runs the house and randomly attacks his boss to train him for potential threats. It’s funny stuff, the kind of thing he perfected on his sketch show “Key & Peele” and while he’s a character who would seem most at home in a short skit he never outstays his welcome here. 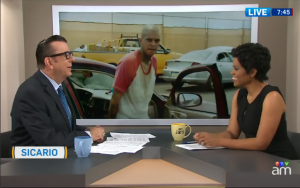