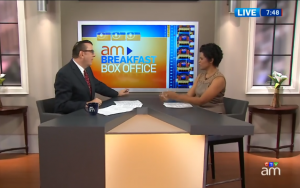 “The End of the Tour” breaks the cardinal rule of movie making—show me, don’t tell mew. It is, essentially, a ninety-minute interview that plays out between author David Foster Wallace (Jason Segel) and his profiler, Rolling Stone reporter David Lipsky (Jesse Eisenberg). Based on Lipsky’s five days spent bantering with the “Infinite Jest” writer, the film shows very little but tells us much.

“To read David Foster Wallace was to feel your eyelids pulled wide open,” says Lipsky, a frustrated novelist who pays the bills writing five hundred word profiles of boy bands for Rolling Stone. A rave review of “Infinite Jest,” Wallace’s satirical 1000 page epic on the pursuit of happiness, prompts Lipsky to set aside his own literary ambitions and arrange an extended interview at the end of Wallace’s three-week promotional book tour.

Travelling to Wallace’s home in Bloomington, Illinois the New York journalist finds one of the most famous writers on the planet trying to balance fame and success with his “regular guyness.” “I don’t mind appearing in Rolling Stone,” Wallace says, “but I don’t want to appear as someone who wants to be in Rolling Stone.”

For the next five days they eat candy, smoke cigarettes, listen to Alanis Morissette, talk and argue. A woman briefly comes between them as ego, insecurity and intellectual curiosity color the relationship between the two men.

“The End of the Tour” works both as a portrait of Wallace and an observation on the interview process. In what is essentially an extended Q&A Wallace comments on the artificiality of the situation—”This is not real,” he says.—acknowledging that an interview cannot capture the essence of a person. It’s a comment on the celebrity culture of self-revelation from a reporter who digs for a scoop and a reluctant subject. Lipsky sees Wallace’s secrecy as a problem—“You’re not willing to risk giving the real you,” he says.—Wallace prefers to let his work speak for him, calling himself a shy exhibitionist. It’s a cat and mouse game between hunter and hunted as Lipsky cozies up to Wallace, then snoops through his medicine cabinet looking for clues to a long rumoured heroin habit.

It’s also a portrait of a writer who is often compared to Fitzgerald, Hemingway and Pynchon, a once in a generation talent who didn’t live long enough—he committed suicide at age 46—to fulfill his destiny. Segel plays him as an unmade bed of a man, a mercurial 34-year-old struggling with the fame that comes along with sudden success. He doesn’t quite trust Lipsky or the process or why anyone would want to interview him—“You can stay around and write a story about my dogs, it might be more interesting.”—but understands the relationship between celebrity and the press.

It’s a quiet performance, tinged with loneliness and brilliance that draws attention to itself by avoiding tortured artist clichés. Occasionally it feels like an excuse for introspective comments from the David Foster Wallace Book of Wisdom, but Segel finds the humanity in him, playing him as a man who lived inside his head even as his world expanded to include a public hungry to know more about him.

Eisenberg’ s Lipsky rides the line between reporter asking tough questions and trying to be a friend. His relationship with Wallace is split between admiration, jealousy—both professional and personal—and self interest. He resents Wallace’s genius and success and his frustration is broadcast in tersely delivered lines like, “Not everyone can be as brilliant as you.”

The two men really aren’t that different, but Wallace, having hit heights Lipsky could only dream of, understands you have to be careful what you wish for.

“The End of the Tour” is an interesting movie that, unsurprisingly, doesn’t peel back the layers of Wallace’s psyche. As good as the performances are, the script is based on the actual 1996 interviews between Lipsky and Wallace, leaving contemporary audience’s with the same vague dissatisfaction the reporter felt at his subject’s reluctance to strip himself bare. Richard hosted a “ComedyPRO In Conversation” session with director Nicholas Stoller on Thursday July 24, 2014 at Just for Laughs in Montreal.

From JFL’s website: Filmmaker Nicholas Stoller (Forgetting Sarah Marshall and Get Him to the Greek) is this year’s ‘In Conversation’ subject. His latest film, Neighbors, starring Seth Rogen and Zac Efron, laughed its way to a $51.1 million US debut over Mother’s Day weekend, and has grossed over $220 million worldwide thus far. In Conversation with Nicholas Stoller takes place at ComedyPRO on Thursday, July 24, 3 pm, at the Hyatt Regency Montreal. It is presented by the Telefilm Canada Feature Comedy Exchange, a CFC initiative in collaboration with Just For Laughs.