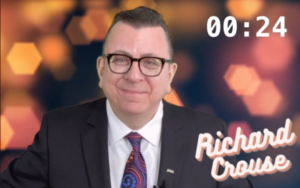 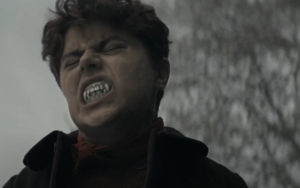 “The Cursed,” a new werewolf movie now in theatres, shoots for the moon by throwing the traditional rules of lycanthropy mythology out the window to create a fresh and timely take on an old genre. But does it bite off more than it can chew?

The film opens in the trenches of World War I during the Battle of the Somme. A French soldier is killed with a silver bullet before the action jumps back in time thirty-five years to the ancient province of Gévaudan in southern France and the true beginning of the story.

Coldhearted land baron (is there any other kind?) Seamus Laurent (Alistair Petrie) is unafraid to spill gallons of blood to protect his property, wife (Kelly Reilly) and children. When a Romani clan lay a claim to his land, Laurent retaliates, attacking, burning and mutilating every one of them. “Do you think you can ride into my country,” Laurent sneers as his hired killers laugh and take photographs with the dead, “take my land and do whatever you like?”

As the last victim is being buried alive, she utters a curse, damning Laurent’s estate and entire family.

As the curse echoes in his ears, everything changes. Laurent’s family is soon affected and his carefully constructed life begins to crumble.

Son Edward (Max Mackintosh) suffers for the sins of his father. His weird dreams of creepy scarecrows and a set of strange metal teeth lead him back to the scene of the Romani massacre. When Timmy Adams (Tommy Rodger), the son of one of the other area land barons, finds the metal teeth buried in on the killing field, before you can say, “Werewolves of London,” he puts them in his mouth and bites Edward, piercing his neck. “We will all pay for the sins of our elders,” says Timmy. “We’re all going to die.”

Timmy scurries off into the woods while Edward is tended to at home. When Edward disappears from his bed, a search party is convened but the boy isn’t found. Meanwhile, a bloodthirsty beast, whose bite either kills or transforms its quarry into a werewolf, terrorizes the area.

John McBride (Boyd Holbrook), a visiting pathologist with a personal link to the case, understands what’s going on and knows that the only “cure” for the werewolf outbreak is a silver bullet.

“The Cursed” has a title that sounds as though it should be attached to exploitation fare, bloody with a side of gross. While there are bloody and gross moments sprinkled throughout, the bulk of the running time is quiet and austere, shot in the low light, greyish tones of so much 19th century horror on film. Director Sean Ellis builds to the scares, constructing a sense of dread and suspense that pays off during the attack scenes.

More interesting is Ellis’s reinterpretation of the werewolf legend. The curse and the silver bullet survived from established mythology but he throws the rest away to create a new look and feel for his creatures. These beasts don’t represent the duality of the werewolves of yore, the mix of animal and spiritual. They don’t wait for the full moon to turn. Nor do they look like the customary Lon Chaney Jr. monster. Instead, as one scene memorably details, the victims are enveloped in a werewolf casing.

No spoilers here, but the creatures are primal killing machines, not the tortured souls of other werewolf movies who are trapped by, but fight against, their nature.

“The Cursed” is a fresh take on the werewolf legend but simultaneously feels like a throwback to the Hammer Horror films of old where charismatic Van Helsing types battled creatures and corsets and tailcoats were still in fashion. A mix of elevated and primal scares, of brains and schlock, it contains enough suspense and memorable visuals to make it worthwhile.