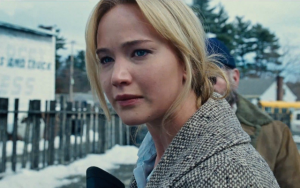 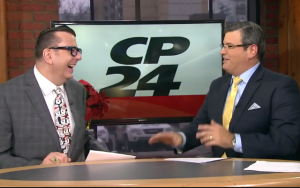 Richard’s CP24 reviews for “Inside Out” and “Winning: The Racing Life of Paul Newman.” Actress Phyllis Smith has had many jobs in and out of show business.

She was working as a casting associate when director Ken Kwapis fell in love with the way she read opposite the auditioning actors and cast her as Dunder Mifflin saleswoman Phyllis on The Office. She appeared on the hit show for nine years and just as that series wound down she got a call from Pixar.

Inside Out producer Jonas Rivera was flicking around the stations one night when he settled on Bad Teacher, a 2011 comedy co-starring Smith and Cameron Diaz. The raunchy film couldn’t be further afield of Pixar’s family friendly movies, but Rivera liked the sound of Smith’s voice. He knew she was the actor to play one of Inside Out’s main roles, the living embodiment of an emotion in an eleven-year-old girl’s head.

“He picked up the phone and called [director] Pete Docter and said, ‘I think I’ve found our Sadness,’” recalls Smith. “I guess it was the timidity in that scene and the timbre of my voice. That’s the nice thing about working for Pixar, when you get that call they pretty much already know what they want.”

Smith joins an all-star cast — Bill Hader, Lewis Black, Mindy Kaling and Amy Poehler as Fear, Anger, Disgust and Joy respectively — in a film that Variety called, “the greatest idea the toon studio [Pixar] has ever had.”

“Long after we’re gone people will still be watching,” Smith says. “Sort of like the Wizard of Oz.”

Smith, who is much more gregarious in person than her onscreen persona would suggest, is riding high today but it was a long circuitous route to television and film success.

“I started out as a professional dancer,” she says. “A show dancer. No stripping, but there were plumes, feathers, g-strings and all that. I was also in two ballet companies, a jazz company. That was my passion but I had an injury and knew logically it was time for me to make a switch in my career. I was getting older. So I just did what I had to do to pay my bills.”

She worked as a receptionist, an NFL cheerleader and manned the box office at a Los Angeles movie theatre. She dressed as Marilyn Monroe and played Steve Carell’s mother in a deleted scene from The 40-Year Old Virgin, but one job stands out for her.

“I worked for JC Penny in the warehouse tagging the merchandise,” she remembers. “I used to stand there and tag thousands of fishing lures or bowling balls or roller shades, which were heavy as heck to lift around. The people were great to work with but the merchandise was a little challenging. If you’ve ever looked at someone and wondered what’s going on inside their head—and who hasn’t?—the new Pixar film “Inside Out” tries to provide some answers. Loosely based on the mood swings of director Pete Docter’s twelve-year-old daughter it’s an action adventure set in the subconscious of a young girl.

The set up is simple. A Minnesotan family, Mom (voice of Diane Lane), Dad (Kyle MacLachlan) and eleven-year-old daughter Riley (Kaitlyn Dias), leave their comfortable Midwestern life behind in favour of business opportunities in San Francisco. Riley leaves behind her friends, her school and her beloved hockey team; everything she’s ever known.

Plopped down in a new city, homesick and surrounded by new people, she becomes moody. She’s completely guided by her emotions, which happen to run things from Headquarters, located deep inside her thinking box. In these San Fran days and nights Fear (Bill Hader), Anger (Lewis Black), Disgust (Mindy Kaling) and Sadness (Phyllis Smith) rule the roost, while Joy (Amy Poehler) tries to hold things together. Navigating Riley’s cerebrum, Joy journeys through long term and core memories, the Islands of Personality and Dream Productions to realize it takes a variety of emotions to make a balanced life.

I don’t know if there is such a thing as an instant classic but “Inside Out” is the best argument for creating the term I’ve come across for some time. From dazzling animation, to a script that toggles between childlike wonder and ingenious introspection “Inside Out” is glued together with a degree of emotional acumen not often found in mainstream film. In other words, it will make you laugh, cry and think.

Like the best of Pixar’s work—“Toy Story,” “Up,” “WALL-E”—“Inside Out” works on multiple levels. It is, first and foremost a family film designed to entertain everyone from the young’uns to grandma, but it’s also simultaneously a flight of fancy and a grounded story about growing up that kids (and anyone who has ever been a kid) will relate to. The movie may deal with abstract thought, but the idea that without sadness there can be no joy, and vice versa, is clear as day.

“Inside Out” is a film that will deepen with repeat viewings, which is probably a good thing as when it hits Blu Ray kids are going to want to watch it again and again, and for once, parents won’t mind joining in. “I started out as a professional dancer. A show dancer. No stripping, but there were plumes, feathers, g-strings and all that. I was also in two ballet companies, a jazz company. I studied modern dance. That was my passion. I always wanted to be a dancer. Not necessarily an actor. When I came to LA I had an injury and I knew logically it was time for me to make a switch in my career because I was getting older. It was hard to make that decision. For dancers at a certain age there is not a lot to fall back on. So I just did what I had to do to pay my bills. I worked as a receptionist. I worked at a movie theatre. I’d go to my nine-to-five job then I’d change my clothes and get to my movie theatre gig and work the box office until eleven o’clock at night. I did that for three years.

“Before I got to LA I worked for JC Penny in the warehouse tagging the merchandise. I don’t think they do it anymore. I used to stand there and tag thousands of fishing lures or bowling balls or roller shades, which were heavy as hell to lift around. The people were great to work with but the merchandise was a little challenging. I used to stand there, thinking about life, wondering what it is we all have in common because we’re not all given the same opportunity. Some people’s health is impaired when they’re born and they don’t even have that to start with and others are charmed with intelligence or looks or whatever they’re given. I thought, ‘There has to be something that we all have. A commonality.’ I figured out that it’s the ability to love. We all, in some form or another, to love and be loved. That was my big revelation. My lightbulb moment. Also to make sure if you’re standing on a concrete floor to make sure you’re wearing comfortable shoes or you’ll pay for it later.”