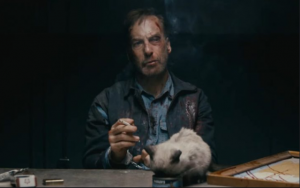 “Hardcore Henry,” a new in-your-face voyeuristic violent fantasy starring Sharlto Copley, is the first movie of the year that should come with a medical advisory. It is such a visceral You Are There experience, I fear the rollercoaster cinematography may not only cause nausea, but also sleep disturbance, constipation, flatulence, and vomiting.

Shot from the perspective of the main character, the story begins with Henry strapped to a gurney. He’s in rough shape, missing an arm or two, a leg and who knows what else. Luckily he’s under the care of his wife Estelle (Haley Bennett), a brilliant doctor who not only supplies tender loving care but prosthetic limbs as well. When she is done he’s a modern-day Six Million Dollar Man, part cyborg, part human. Just as she’s about to insert his vocal chip all hell breaks loose and he’s forced to make a daring escape. Separated from Estelle he finds an ally in a mysterious and resilient man named Jimmy (Copley) who helps him track her down.

Cue the carnage—parkour, tanks, fist fighting, gunplay, testicle squeezing, grenades, no form of combat is ignored. Remember, this is all shot from his point of view in a blur of fists, bullets and blood. It’s capital ‘V’ violent.

Gamers will find “Hardcore Henry’s” first person technique familiar, but at ninety minutes the film feels like an idea that overstays its welcome by at least half-an-hour.